I’m on an animal care course at the moment, and it means I have to do 150 hours of work experience a year. This year, I chose to do 90 of them at Dogs Trust, Loughborough and it was the most enjoyable two weeks of my life so far.

My first day was spent getting to know the rules and protocols of the centre, and where everything is. I also walked a few dogs to learn routes which were good for the dogs and how to avoid other people walking dogs which could have issues with other dogs, such as fear or reactivity. From that day, I spent a lot of time in with the puppies since a litter of American Bulldog puppies had arrived at the centre (about nine/ten 11 week old and two 5 month old), and there was a lot of jobs to be done so extra help was useful to them. I helped with weighing, micro-chipping, feeding, cleaning out, exercising and socialising the puppies.

Something interesting I learnt was that the Dogs Trust won’t use any negativity at all with the dogs, so that means no saying “no” or pulling them around. They believe that if a dog is couped up all day in a kennel (there really isn’t enough time to walk them all to the extent they need), then it deserves as much freedom as possible when out on walks. This means that they have the full length of the lead and can go anywhere they want, obviously unless it’s dangerous for the dog or other dogs/people. They can sniff as much as they like and are let off lead as much as possible in paddocks which prevent other dogs from interrupting them. Positive reinforcement was the only way they trained the dogs and there were a lot of treats involved! There was also a homework house which let the dogs relax in a normal environment and also allowed the carers to see if there were any obvious issues which would be likely to happen in a home. For example, one dog had an issue with people sat on chairs/sofas when he first got there, so the homework house helped him to get used to that. Another dog was very reactive to the doorbell and to strangers entering her house, so it gave the carers the opportunity to work with her on that issue specifically, obviously making these dogs easier to rehome and more desirable.

I also watched some training with two sighthounds (Dennis the lurcher and Bowie the lurcher) where Dennis was being muzzle-trained so that he could leave the centre fully trained in case the new owners wanted to muzzle him when off lead since a lot of lurchers have a high prey drive. Also, Bowie was being trained to wear a cone since he was going to have his eye removed (he was blind) at the same time of his castration, so they wanted him to be used to it so he wouldn’t be excessively stressed. 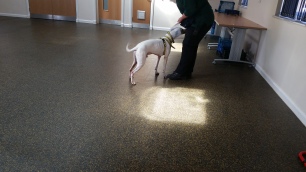 I figured most people reading this would be most interested in seeing photos of puppies and dogs so I thought I’d tell you the stories of some of the dogs there which are sadly quite typical in rehoming and rescue.

These are a few pups from the litter of 9/10 week old American Bulldogs. They were handed in to the centre since the person who bred them couldn’t find homes for them so the dogs trust took over. They arrived on the Monday I started there and by the time I left (two weeks later), they all had homes. They’ve had no bad experience, no trauma and no incident which has left them “damaged”, so essentially, the people who adopted them now have an American Bulldog puppy for £120, whereas they would normally cost from about £400-£1500. However, people will tend to shy away from rescued puppies because they’re “damaged” and unpredictable, which is silly because these puppies hadn’t had a chance to become damaged. 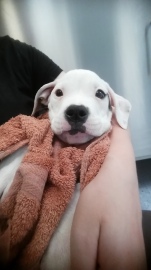 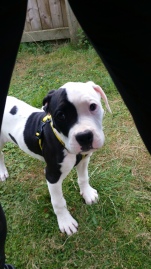 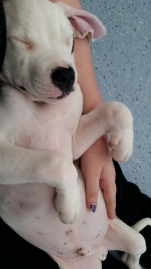 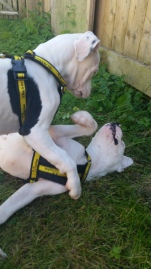 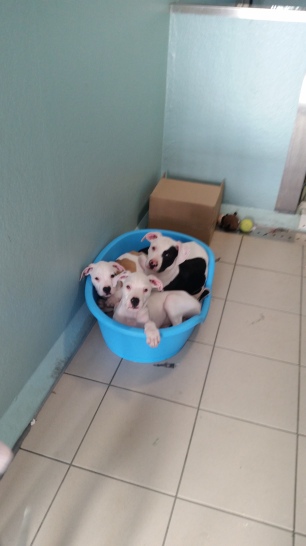 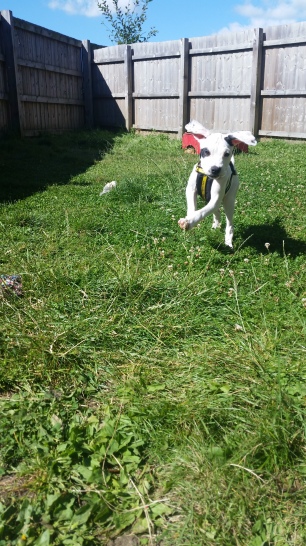 This is Olympia, another American Bulldog puppy, from the same owner, but she’s five months old. There were two at this age and the other went straight into foster (then was adopted by her foster family 2 weeks later). She was nervous but not hugely and once I’d walked her a few times and spent time with her, she happily gave me hugs and let me walk her without a fuss. She was fine with other dogs and people once she got to know you, and she too was rehomed during my second week, after arriving on the same Monday as the litter. 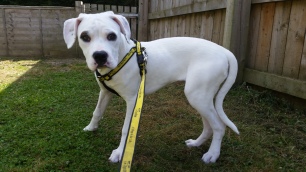 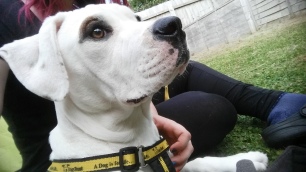 This is Lady, another puppy who is a five month Beagle cross Cocker Spaniel. She was a little more nervous than Olympia and less sociable with other dogs if they were too full-on and bouncy. She took longer than Olympia to become fine with me but it happened eventually and she greeted me every morning and let me put a harness on her and check her feet when she picked one up (it was just grass stuck in her pad). She too found a home before I left. 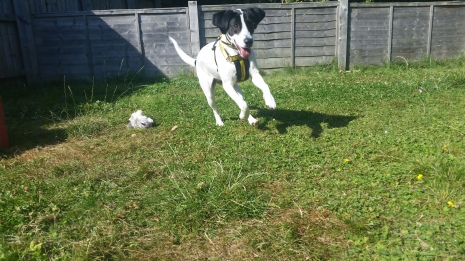 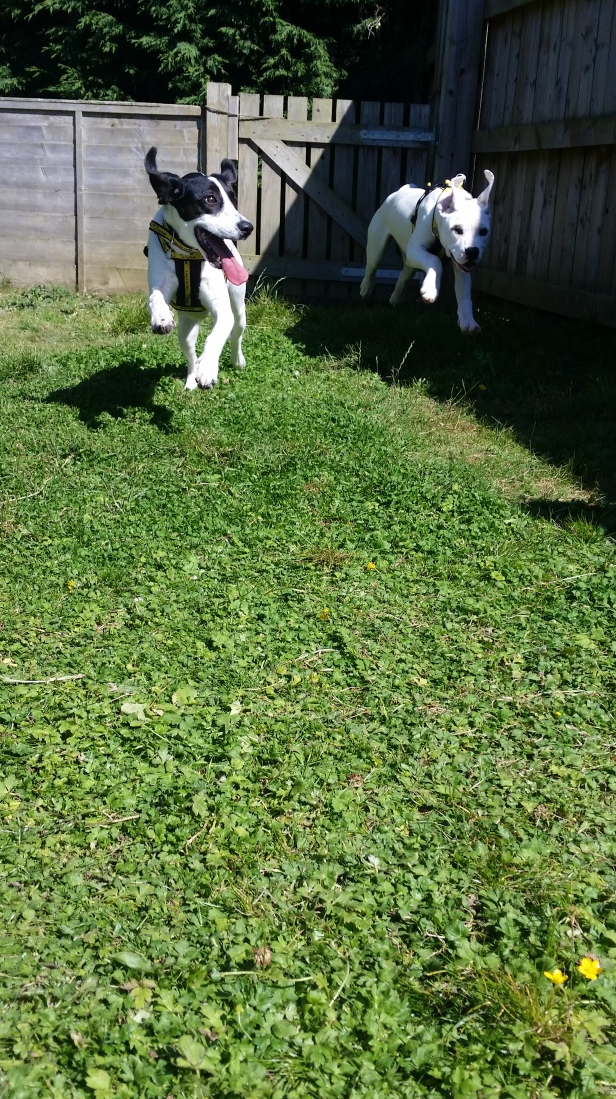 A special case is Dennis the lurcher. He has a problem in the bones in his forelegs which isn’t clear in the photos because he also doesn’t enjoy standing still. His wrists touch and are growing inwards which will soon become a huge problem as he’s only eight months old and still growing. He will need expensive surgery to fix his legs and until then, he won’t be up for rehoming because of how expensive it’ll be, but when he does go up for rehoming, he won’t be available for long because he’s lovely. He’s very attractive of course, but he’s also the most sweet-natured dog ever and all the staff love him because he’s just so simple to work with and so loving to everyone and everything. 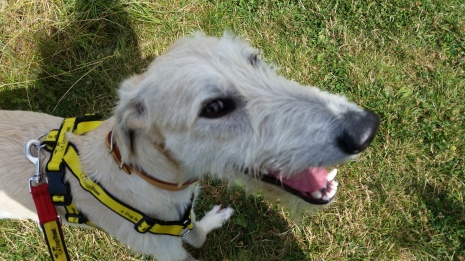 A lot of the dogs in rescue are bull breeds, especially staffies because they get treated badly/roughly because of the breed which causes them to show aggression towards kids, cats, other dogs etc.. This then gives them a bite record, enforcing the assumption that all bull breeds are nasty and aggressive and can’t live with kids or other dogs. This means they get left behind, even though a lot of their behaviour can easily be manag 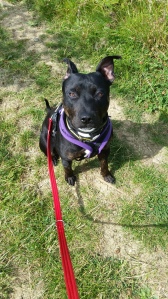 ed or is actually non-existent since the bites were provoked. I don’t know the history of him, but this is Kevin, a staffie. He’s the only staffie (I think) that volunteers are allowed to walk and the sweetest little ball of wiggles ever. He greeted me like I was his bestest friend in the whole wide world and then spent the whole walk looking up at me and wagging when we made eye contact. He sat for me when I got a treat out of my pocket, before I even said anything, and he was no problem seeing other dogs. However, he isn’t currently reserved, probably because he’s a staffie and people assume the worst. He’s young and bouncy and can live with older children as well as other pets, so he won’t have ever bitten.

I think a lot of people are happy to buy puppies from breeders or even puppy farms unknowingly, before they consider a rescue dog, just because they think all rescue dogs are aggressive or going to kill their children or run away at the first chance. All my dogs are rescue dogs, most of the people I know’s dogs are rescued and from just two weeks at the Dogs Trust, it’s obvious that with the right care and consideration for the dog, any issues can be worked through. Any puppy from a breeder can also have these issues too. Any dog can be triggered to become aggressive or reactive or nervous, it just takes the wrong experience. If you take anything from this post, take away the thought that rescuing changes these dogs’ lives. Most dogs hate kennels and once in a home change and become a completely different dog. A dog which is aggressive or easily frustrated in a kennel can become relaxed once it’s in a home and can be given plenty of exercise with the same regular family members. If you can’t have a dog because of where you live or because of money etc, think about volunteering with your local rescue because most of the time, they need the extra help and on top of that, you can spend a day working with dogs and helping to find them homes too. And because I know why you’re really here, here are some more photos of the dogs I met! 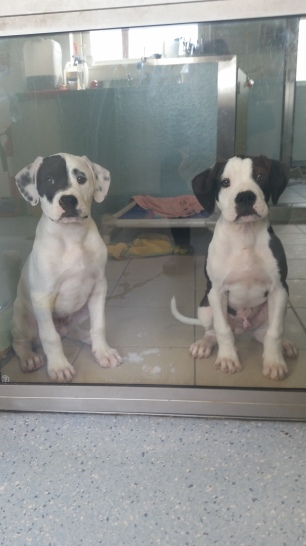 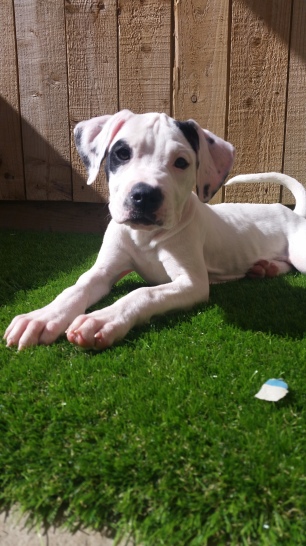 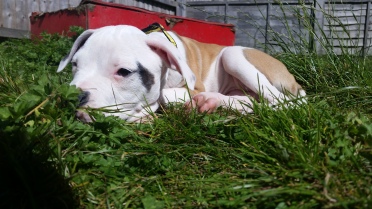 Peaty having a little lie-down

Peaty having another little nap..he’s a sleepy guy.. 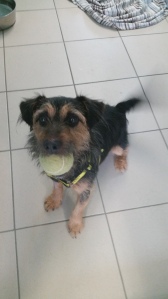 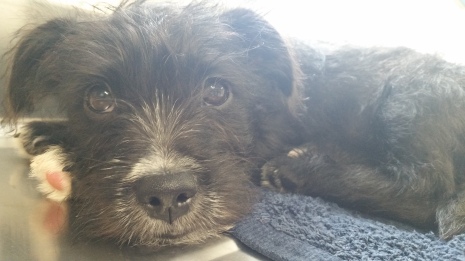 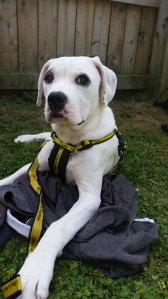 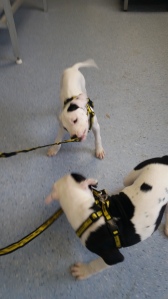 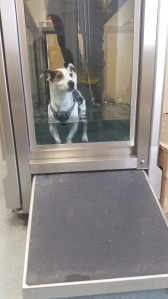